Archive for the ‘Social and Cultural Life’ Category 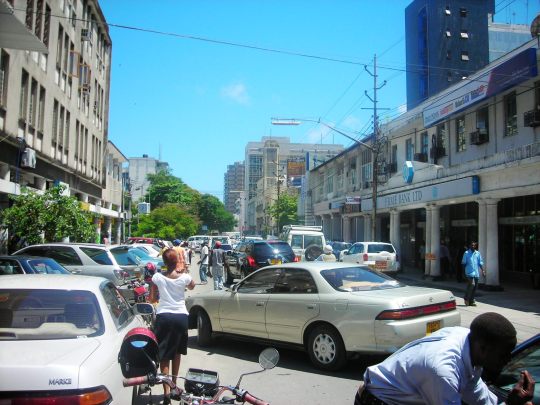 Dar es Salaam, locally known as Dar, is the largest city in Tanzania. It is the largest port city in East Africa. Most people think it is the capital city of Tanzania. However, in 1973, provisions were made for Dar to relinquish its capital status to central inland city –Dodoma.

Dar, a city established nearly one and half century years, in 1865, by a Sultan. Now it is home to a population of 3 million, a number projected to double by 2020. The overview of Dar is magnificent and northern beach hotels are great surrounded by an ambience of a natural harbour on the Indian Ocean.

Visiting Dar for the first time you must take some Kiswahili lessons. If you think we are wrong, note, this is home to Kiswahili dictionary. Imagine of students taking chemistry lessons in Kiswahili. Jokes on the roll is Kiswahili was born in Dar, raised in Zanzibar –island, matured in Kenya, fell sick in Uganda and die in Rwanda. Definitely buried in DRC.

My encounter of Dar was when my friend defied basic advise on this coastal city. We had been warned on when you order for food in Dar, you must say naomba translate to please. My good friend decided to be Kenyan, show ignorant rudeness and ordered a waiter to bring him roasted banana and beef stew. My humulity to say naomba saved me from one hour wait when my friend was not served. Till the waiter came back furious and said my colleague was rude to her.

A view of the green Dar.

This is just Dar, haven of peace,  polite and friendly Tanzanians light your face. It is among the top-ten fastest growing cities in the world, and three cities in Africa. According to African Green City Index, Dar ranks well below average together with Nairobi city. Although, it has no matatu madness of neighboring cities. All residents say, if you are in a hurry, you should have come yesterday in Dar. 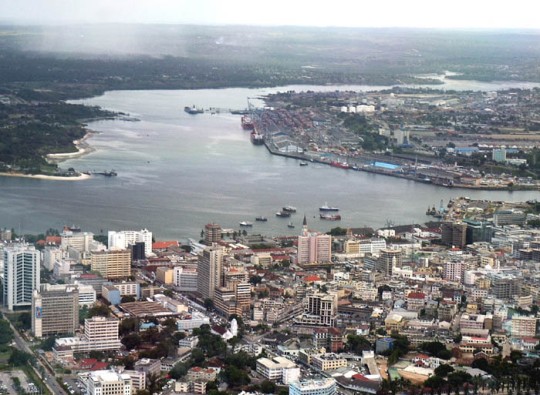 Aerial view of the port city.

Kenya’s awesome white beaches stretch 300miles or 450 kms and although some parts of the beach are difficult to reach, most is accessible from different villages and towns along the coast.

Wherever you are, you will find beaches colourful shadowed with hotels and homes or you might encounter remnant forest  or mangroves swamps and mud flats.  Some places you may also come across creeks and river deltas.

Mombasa city from Fort Jesus’ fortified wall you have fantastic view of Indian Ocean colour matched with magnificent white-walls hotels lined up in between tall green palm trees. This World Heritage Site is the landmark of this coastal city and is a great place for dinner with cool breeze and  million stars above.

An early morning walk or boat ride, the off-shore coral reef provides ample opportunity for fun and exploration. Apart from swimming in the afternoon you could try out surfing, snorkeling, diving or fishing. If you feel more sand in your shoes take a camel ride and be like the first merchants who came down here – Mombasa. You will loss track of time and this why Mombasa is a Sea, Sun and Sand – raha city.

Cities, Landscape and Land Use, Mombasa, Others, Social and Cultural Life 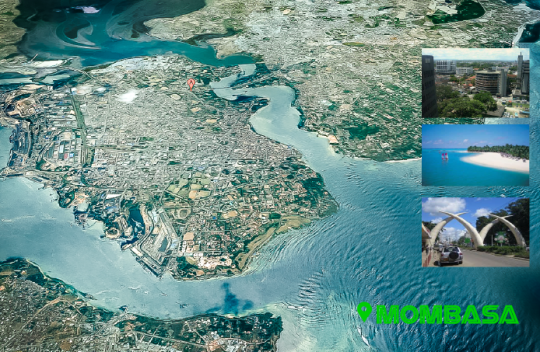 Mombasa is the second largest City in Kenya. This is the sea city that lies next to the Indian Ocean with a major Port and an International Airport.  Its name derives from Manbasa, the Arabic name of the former sultan of Mvita, which had its capital here.  In modern times the City is the headquarters of Coast Province and with new constitution, it is the capital of Mombasa County.

The City is located on Mombasa Island which is separated from the mainland by two creeks: Tudor Creek and Kilindini Harbour. The island is connected to the mainland to the north by the Nyali Bridge, to the south by the Likoni Ferry and to the west by the Makupa Causeway, alongside which runs the Kenya-Uganda Railway.  The Port serves both Kenya and landlocked countries, linking them to the Indian  Ocean.

The City also serves as the center of the coastal tourism industry. Being in the tropical climate which is tropic wet and dry climate, it favors tourism. Therefore, this makes the city a major world’s destination and among premier places to visit in Africa. It has attracted visitors since 900A.D such as Arab traders and Portuguese traveler – Vasco da Gama who came in 1498.

Sunshine is throughout the year. Landing at the coast for a holiday you are taken to task with coastal heat. You may shower more than thrice which is not a mistake. Mombasa it completes your tour to Kenya if you are on vacation. The sandy beaches to North and South, historic sites such as Fort Jesus and luxurious hotels – why leave Mombasa. Whether day or night you are fascinated by breath-taking, eye-satisfying scenes and relaxing environment.

Mombasa City in the sun

We advocate for green